Rare Pitbull Colors: Have you ever seen a blue fawn or merle pitbull? If so, you’re not alone! There are also liver brindle and merle Pitbulls. Read about these rare pit bull colors and their different traits. Then, get ready to adopt one of these beautiful animals! You’ll be surprised at their lovely personalities and cute features! Whether a dog lover or a breeder, you’ll want to find one of these gorgeous animals as part of your family!

The American Kennel Club and the United Kennel Club officially recognized the Blue Fawn Pitbull as a distinct color. It is not as common as other Pitbull colors, so you should look for a professional breeder to acquire this color. A recessive dilution gene causes color. This gene is responsible for transporting melanin-containing cells from one body part to another. As a result, the blue fawn color is considered very rare.

The Merle pitbull color is one of the rarest of all Pit Bull colors. Merles are known for their unusual genetics and controversial history. Although most kennel clubs have rejected them, Merle Pitties can fetch three to four times more money than their black or brindle counterparts. Although they have a reputation for being difficult to train, merles are gentle, loving dogs. Listed below are some facts about this unique pitbull color.

The merle color is not considered a breed by the American Dog Breeders Association because of the increased health risks it poses to puppies. Because merle dogs are generally healthy, they may have an increased risk of eye and hearing problems. However, the merle color can lead to hearing loss in some puppies. This trait is not present in all Merle Pitbulls, but some are more susceptible than others.

There are many different tri-color Pitbulls, but these particular breeds have become increasingly popular in recent years. These dogs have three distinct colors: black, tan, and one base color. Although kennel clubs do not recognize these puppies, they do exist. This unique pattern of color is caused by a gene known as a recessive tan point allele that must be present in both sire and dam.

Fortunately, breeders are creating more tri-color Pitbulls than ever before. Today, numerous breeders are developing new color combinations and avoiding breeding the tri-colored breed for several generations. However, these tri-colored Pitbulls are so unique that you may even mistake them for mixed-breed dogs! Breeders should always check the health and temperament of tri-colored puppies. While tri-colored Pitbulls do not carry the same health risks as merle and white Pitbulls, they come with potential health problems.

Red and blue are not the only Pitbull colors. Red and blue Pitbulls have different patterns and may even be solid colors, like black. These colors are caused by the dilution of pheomelanin in the dog’s coat. Blue and gray Pitbulls are considered rare, and they have been the subject of much controversy. Luckily, there are now ways to identify these dogs! Read on to learn more about their unique coloring!

Although liver brindles are common in Pit Bull types, they are rare. Some breeds have a red liver color, while others have blue or lilac coloration on their face. The Whippet is a light brindle, while the Neapolitan Mastiff has a heavier blue brindle. Isabella Pitbulls have lilac and blue coloration on their noses but are hard to distinguish from solid isabella. The Neapolitan Mastiff is one of the few breeds that have both.

In addition to the black and white color, you can also find rare masks and body markings on your Pitbull. Black covers result from the black mask allele, located in the E locus, and expressed on dogs without a solid black coat. However, if your Pitbull has this coloration, you should be able to identify it quickly. It’s important to note that an actual black mask means that it doesn’t have the color blue.’

Although there are many colors of Red Nose Pitbulls, red is the most common. The breed has the highest energy level of any Pitbull mix, making it an excellent pet for active households. Because of its high prey drive, Red Nose Pitbulls are prone to chasing small furries, such as mice and rats. Because of this, they are often better suited as only dogs and may require careful introductions to other dogs.

It is essential to choose a responsible breeder for your Red Nose Pitbull. The American Kennel Club recognizes Red Noses, and you can search for a breeder in the AKC Marketplace. Avoid puppy mills, as these breeders are more interested in profit than finding good homes for their puppies. Before purchasing, vet all puppies and check for other health issues, such as ear infections or skin issues.

The spotted pitbull is one of the most distinctive breeds of dogs. Usually black, this dog has a reddish-brown nose, white on the cheeks, and tan on the face—the tan coloration results from the presence of two different pigments, eumelanin and pheomelanin. The spotted pitbull has a higher concentration of eumelanin than a black or a merle dog, and is caused by a gene that decreases its strength. The pigmentation of the pitbull’s coat is determined by a gene called S.

The black and white spotted pit bulls have black coats and are commonly used for hunting. A black pitbull may have white markings on its chest or toes. If you consider adopting one of these dogs, it is essential to research their characteristics before deciding whether they will be good family pets. They can be amazingly cuddly and friendly, but they must be adequately trained and socialized with children.

Despite the appearance of the spotted pitbull, this breed is generally friendly. Often show fear and aggression toward other dogs, but they can be good companions if adequately socialized and trained. If you’re looking for an energetic dog that’ll be a good companion, consider adopting a pit bull. The breed is brilliant and loyal. It loves its human master and will be your best friend. Just be sure to spend plenty of time with it. 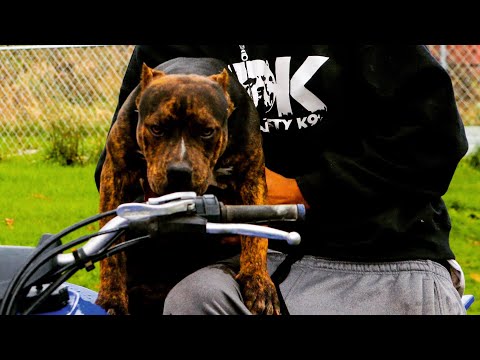 Blue fawn Pit Bulls have a unique appearance due to a recessive homozygous gene, making them one of the most uncommon shades of Pit Bull. A puppy must receive the dilute gene from both parents to acquire the blue fawn hue.

Blue-nosed Pitbulls are the product of a recessive trait, which means they are bred from a smaller pool of genetic material.

Pitbulls come in various colors, from fawn to red to brown. The structure of color can vary widely among animals. For example, a Red Nose, Black Nose, or even a Blue Nose can be found on some canines. Pitbulls come in every shade of the color wheel to coat patterns and colors.

In general, breeders have only recently begun attempting to produce tri-colored Pitbulls. The three-color coat is the result of a recessive genetic mutation. To have a pup with a three-toned jacket, at least one of the parents must carry the recessive gene.

Blue and lilac Few Pitbulls Are Tri-Color.Pitbulls with the tri-color trait are extremely rare, as they require two copies of this gene to do so. Although Pitbulls come in various hues, some are more common than others.

Price of a Tri-Color Pitbull Tri-colored Pitbulls aren't as standard as merle or all-black dogs, but they're still uncommon. Between $2,000 and $5,000, they're the norm. Even though they can come in various coat colors, their price will not be changed unless some of these colors are exceedingly unusual.

American Pitbull Terrier of the Gottiline ancestry is a Gotti Pitbull. Among American bullies, this breed immediately became one of the most popular. Since they were initially produced in the late 1990s, this is a relatively new bloodline.

The Colby Pitbull is the most common Pitbull lineage. A hundred years ago, this unique bloodline was born. Colby Pitbulls are well-liked and well-respected because of their appearance and disposition.

A 19th-century dog fighting breed, the British Bull and Terrier produced through crosses between the Old English Bulldog and the Old English Terrier, is the ancestor of the majority of pit bull-type dogs today. It is a list of canine breeds frequently referred to as pit bulls.

In the past, a Gator Pitbull was bred to be a dog that could be used for fighting. Black, blue, brindle, red-nosed, and blue-nosed variations exist. They can weigh up to 65 pounds (29 kilograms) and grow to a height of 15-20 inches with their short, lustrous coats (38-51 cm)